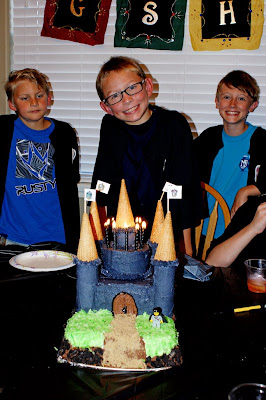 In June, Riley turned 11! This was his year for a big "friend" birthday party. He is a HUGE Harry Potter fan. At my last count, he had read all seven books in the series at least four times each. He has been Harry Potter for Halloween twice and Draco Malfoy once. Even his room is decorated in a Harry Potter theme, so it was no surprise that he wanted to have a Harry Potter themed birthday party. Thanks to my sister-in-law, Alicia, who recently threw a Harry Potter party for my nephew and mailed me all of her leftover stuff and thanks to the internet, we were able to put together a pretty fun party! 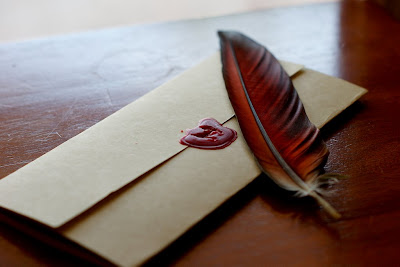 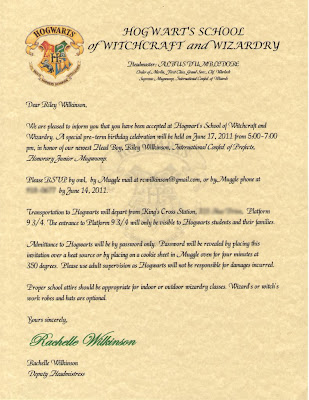 Party Invitation--inside. Using a mixture of baking soda and water, we wrote an invisible ink code word in the blank space on the bottom of the invitation. When heated, the solution turns brown, revealing the code word.

Decorations--I wish I could take credit for these, but they all came from my super sister-in-law 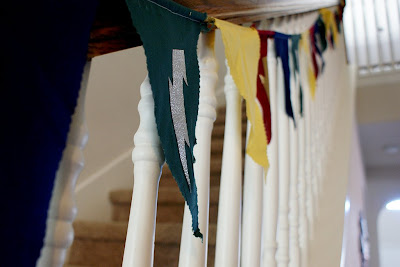 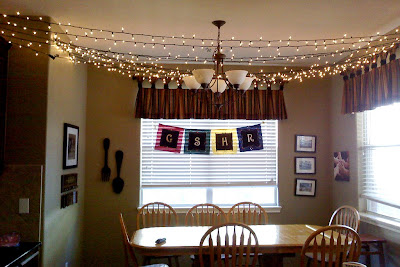 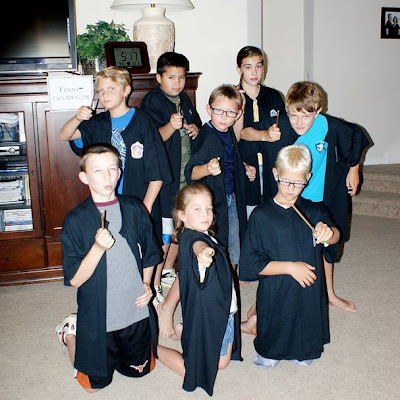 When the kids arrived, we used a sorting hat to sort them into different houses. Each kid got a robe for his/her house (robes were made from XL Men's black t-shirts cut up the middle and ironed on house crest).

Each "student" received a wand (pencil spray-painted gold) and a Lesson's book, which they used for each of their "classes".

They started in "Charms" class, where each house (team) was given a list of spells which they had to match to their function.

Next they went to "Care of Magical Creatures" class where everyone made their own origami owl. (I was so busy running the party that I didn't get pictures of these, but they were cute!) 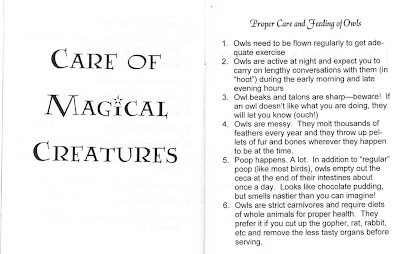 Page from the Lessons Book for Care of Magical Creatures


The third class was "Divination". I the kids several different Jelly Bellys and they had to taste them and use their powers of divination to determine what flavor they were.

The fourth class, which was definitely everyone's favorite, was Potions! I found a great "potion" online that changed colors and bubbled. The kids thought it was great! 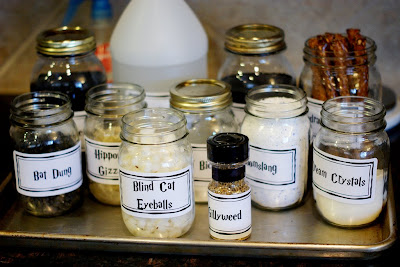 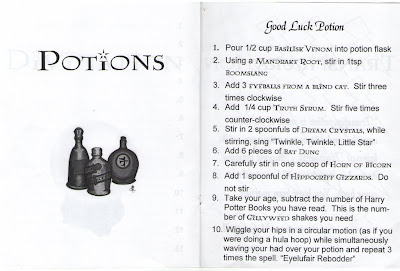 Potion Instructions from the Lessons Book 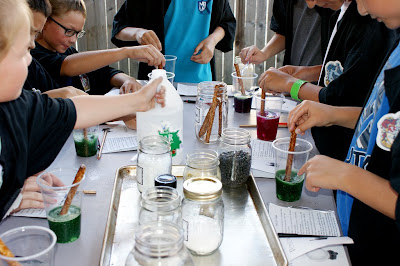 Mixing up the potions 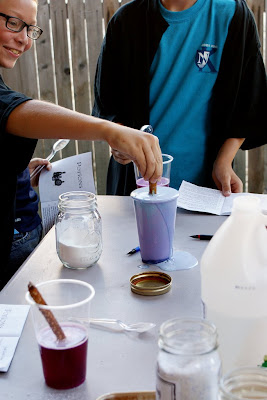 
We ran out of time for the fifth class, which was going to be "Transfiguration" (basically charades with the Harry Potter characters)

We ended the party with a feast in the dining hall and cake. 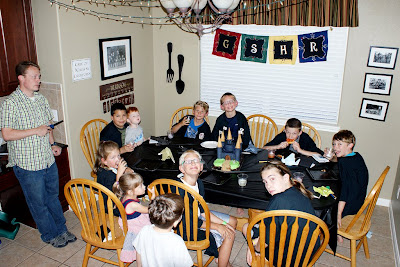 The "feast"--nothing too magical, just pizza, but I did put a drop of food coloring in the bottom of each of the cups, then covered with ice, so that when the Sprite was poured in, everyone's drink turned a different color 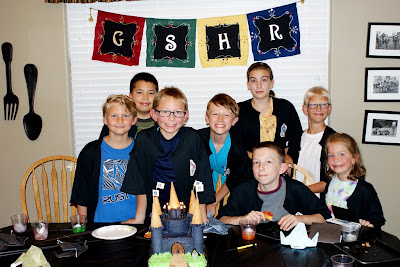 Riley with his friends and Hogwarts cake


The goodie bags were also courtesy of Alicia (my sister-in-law). She had some leftovers from her party. They were so great! Inside the goodie bags, we put Bertie Botts Every Flavor Beans, Butterbeer and a golden snitch. 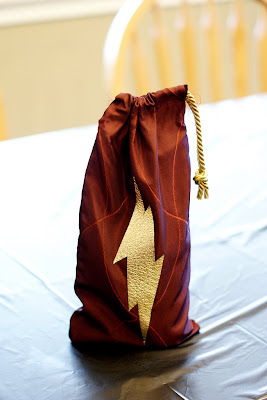 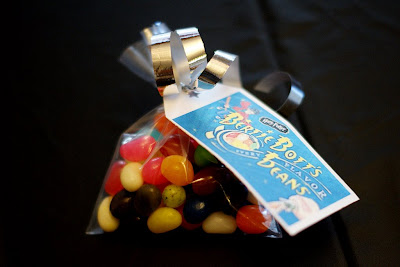 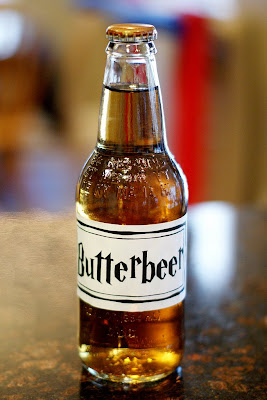 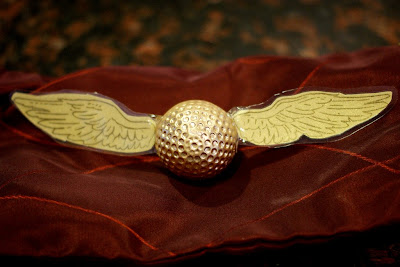 I love planning fun kids birthday parties, but they sure are a lot of work!!! Riley loved everything, though, so it made it all worth it!


On Riley's actual birthday, we celebrated with a small family party 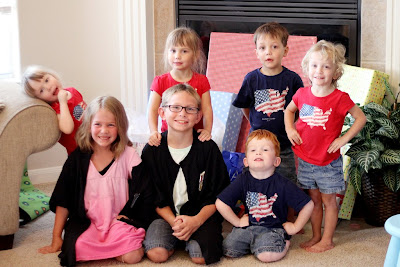 Riley with his presents (Back: Kaydence, Kassidy, Ryder and Kyndall, Front: Kaiya, Riley and Rustin) 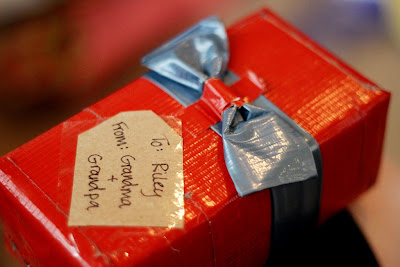 I loved the creative duct tape wrapping on this present from Grandma and Grandpa Wilkinson---almost too cute to open! 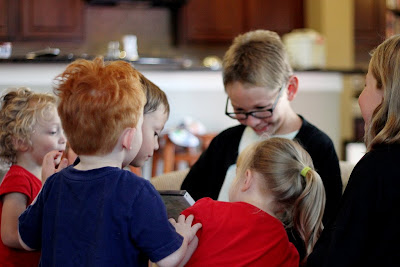 The kids crowd around Riley while he opens his presents. Riley is a GREAT present opener---he gets super excited about everything and always jumps up to give the present giver a hug and a Thank You. 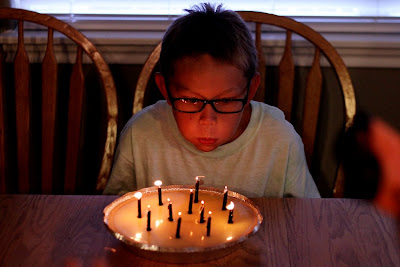 Blowing out the candles on his Sour Cream Lemon Birthday Pie!

I cant' believe that I am old enough to have an 11-year old! Riley starts middle school this year and I am just not ready for the drama that usually comes with that. I am sure he will do great--he is such a happy, positive, upbeat kid. His mind is always thinking up some new invention. He has a quick smile and a giggly laugh that is contagious. He has really matured a lot this past year and become much more responsible. I am lucky to be his mom!

What an awesome party! You did an amazing job - I don't know how you find the time.

Riley is growing up so fast, I can see the changes in your pictures from a cute little boy to a handsome young man. And yes - Middle school is a lot of drama (but then again so is High School). Has he asked for a cell phone yet? You will be amazed how many girls will start texting him :)

What a fantastic party you through. Thanks for sharing all the fun details. I wonder though, where were your quads during the party? Keeping the little kids busy while I run a party for my older kids is always tricky.

Angela--Jayson turned on a video for the quints upstairs to keep them entertained during the party. It mostly worked :-)

BTW: You have your address and phone number on that inviation letter...

You are so creative and such a great mother! You are such an inspiration!

It's no wonder to me that you only do fantastical parties every other year. You put so much work and so much detail into them!!

Love your creative ideas for the party! How fun!

What an awesome party!

I came across your blog while searching for ideas for my daughter's Harry Potter party. She *loves* the idea of the Potions class and would like to do this at her party. I can't tell from your description of the potion what the "dream crystals" were and I've been searching the internet, trying to figure it out, but to no avail. What did you use for the dream crystals? Thanks so very much!!!

I didn't realize I left Dream Crystals off the description list.....it was just sugar---didn't do anything real to the potion, it was just something extra to add.

Thank you so much for your help and sharing your ideas! My daughter can't wait to try this at her party. Thank you again!

am planning a party for my son and was wondering if you would share a link to your lesson book...what a great resource! thanks in advance.

do you have a link to your lesson book? I am planning a party for my son and what you did was fabulous, if you don't mind sharing. Thanks!

cbm1998: Send me an email and I can email you the file for the lesson book. rcwilkinson@gmail.com

I am planning a party for my son and would also love a copy of your lesson book if possible! Thanks so much for sharing all your ideas, so great!