How Many People Does it Take to Cut a One-Year Old's Hair???

Answer: SIX!!! Three to hold him down, one to take pictures, one to take video and one to actually do the cutting!

Now that the babies are officially one year old, we decided it was time for a haircut! Ryder and Rustin both got their first haircut just after their birthday. My good friend Cassaundra was the hair-cutter, Ryan (my brother), Tiare (my sister) and Kiera (my cousin) all helped hold the babies down while my mom took pictures and I got the whole thing on video. Quite a production! 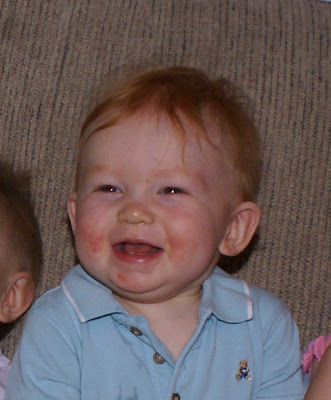 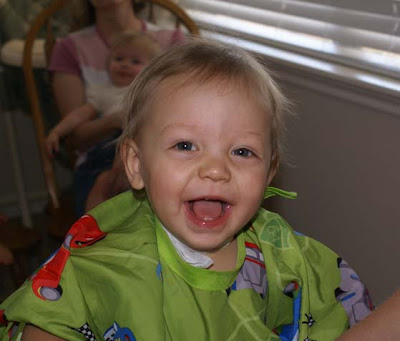 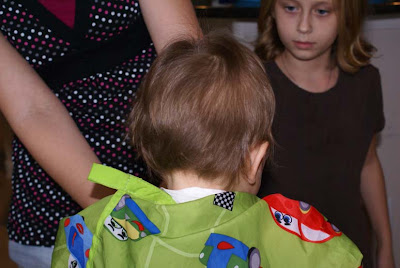 Before Picture: Ryder (back) 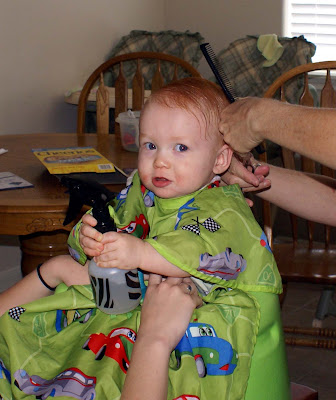 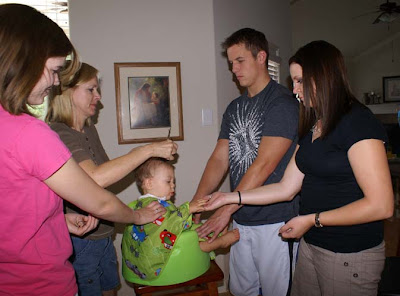 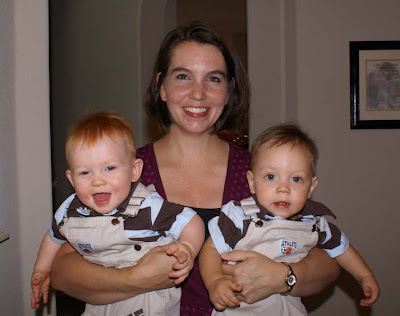 After Picture: Rustin and Ryder----don't they look cute???? It is amazing how a haircut can change them from babies into little boys!!!

How Many People Does it Take to Cut a One-Year Old's Hair???

Uh-they are so cute! Look foward to more pictures!
~Elyse~

They are still cute and little, just little boys and no longer babies as you said. I love the picture of the three of you. Great to see your siblings and fun Cassandra in the pictures too. Those two boys are and will be heartbreakers for sure.

Rustin's name with his red hair is perfect. Funny how things work out :)

How ADORABLE!!! I love their matching outfits too

And you? MUST tell us how you look so rested with 7 children. I gotta know. I have ONE two year old and it looks like I haven't slept in 32 years.

They are so cute! Mine took that same transformation after their first haircut. They aren't little babies anymore. Hold on to your hats! Everything goes by so fast!

Adorable, of course! What a fun milestone!

I am just catching up on your blog and I love all the birth pictures! Who's the great photographer?

I'm looking at your blog with my 1 year old (oldest of triplets) and I said "five babies" and she started giving the computer five and saying five :) I don't think she caught on to the concept :)

oh man, that first haircut is heartbreaking when they all of a sudden look older!

Oh my goodness, they are so cute.

Hair cuts change them so much. I always hate it when we cut my boys curls off, he looks like such a big boy.

They are adorable! For a mama of seven you look so well rested! How do you do it??

Okay This is probalby so random, But i have to say it. I was blog searching and found yours and love it. Since i loved it i wanted to know more so i kept on scrolling down to the bottom to before the babies were born. But I came across a photo of you son holding A book of mormon. That mad me happy cause i too am LDS and i thought it was amazing that you are raising you wonderful children in the church. I live in Utah and everybody here is mormon so to come across a family in texas that is aswell was Awesome(i no it is not uncommon but still). You are an amazing mother and your kids are so adorable-all seven of them.
-Meghan

We just recently had our 1-year old son's hair cut and employed bubbles. Lots and lots of bubbles. While one person blew bubbles (that kept the baby entertained), the other snipped. Once he got bored of that, we gave him a lollipop which allowed us to finish the job.

I wish I had thought of those things when our triplets were smaller. Way back when, we would just give our babies a popsicle and clip as fast as possible before it melted all over them!