Have you had your HUG today??

As the babies get older, it is fun to watch them interact with each other. They love to make each other laugh, chase each other around the house and steal each other's toys. Today Kassidy decided to give Ryder a hug, and it must have been contageous because soon there was a hugging frenzy going on. They were all hugging each other and giggling like crazy. It was so adorable! 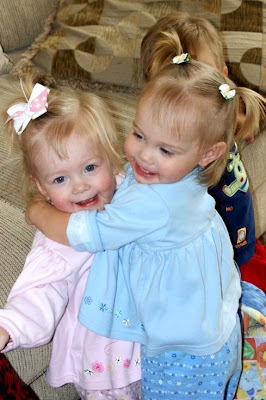 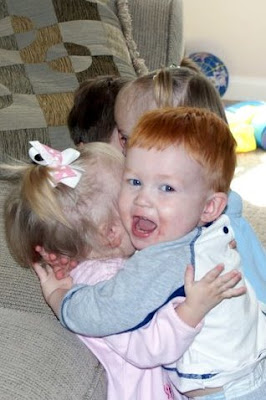 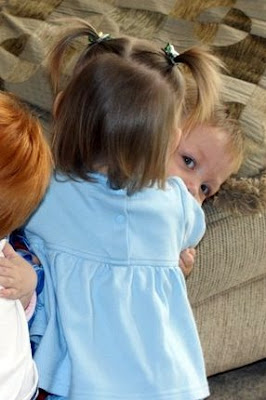 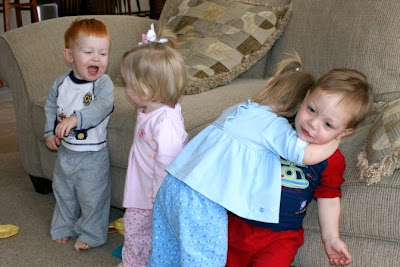 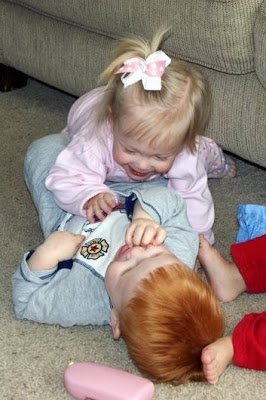 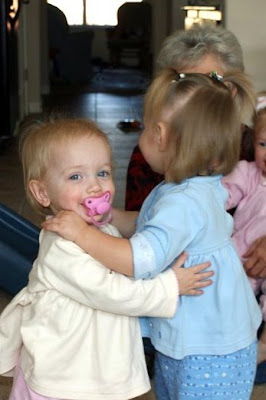 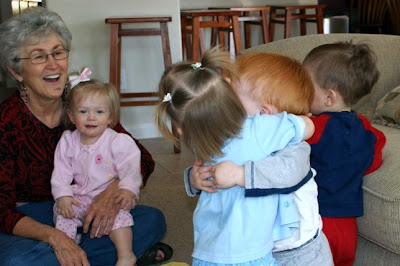 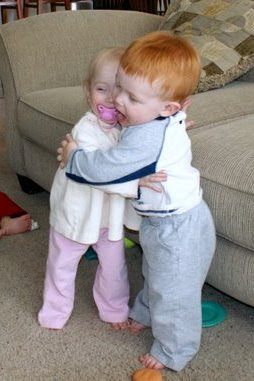 Have you had your HUG today??

But that is not where the story ends...The week of the diaper drive, HEB contacted us, to tell us that in the process of helping the Jones', they heard about our family and wanted to help us as well! A few days later, the unit manager from our Cedar Park HEB came over to deliver a very generous donation of gift cards. By our calculations, the gift cards are equivalent to about a year's worth of diapers!! What an amazing and unexpected blessing for our family! Especially in these tough economic times, we are so grateful for the incredible generosity of HEB! 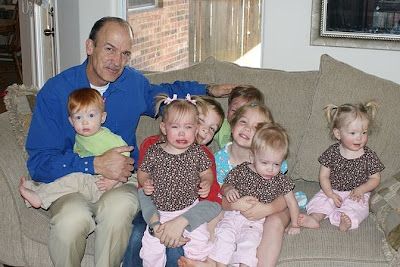 Saturday the babies officially turned 18 months! Wow, I can’t believe how fast the time has gone. They are really turning into little people now and it won’t be much longer before I will have to stop calling them “babies”. They are learning new things at an amazing rate. They are anxious to be like the big kids and do everything that they can do, and they get frustrated when they can’t do everything they try to do. They are climbing on everything and figuring out new ways get into things that are off limits. They all love to sing action songs like Head, Shoulders, Knees and Toes and the Wheels on the Bus. They also love Ring Around the Rosie—although they haven’t quite got the concept of holding hands in a circle. Instead, they each hold on to one of my fingers and walk around.

Their language skills are really improving. They don’t say a lot, but I can tell they understand quite a bit of what I say. Some of their favorite words are: shoes, ball, bath, and uh-oh. Kassidy’s first and favorite word is “please”. A few of the babies have also started saying “Thank you”. Kyndall can sing “ashes, ashes all fall down” and “clean-up, clean-up”. Actually, the most interesting thing to me are the words that they are NOT saying---they rarely say mom or dad and not one of the babies says “no” yet. 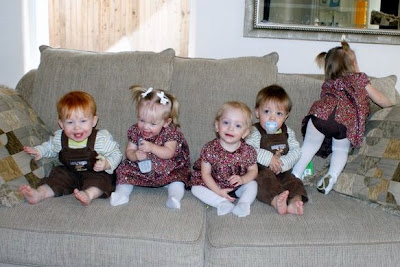 Rustin, Kaydence, Kyndall, Ryder and Kassidy--My attempt at getting a group shot this week. I actually wasn't planning on trying for a group shot, but when I started to take a picture of one baby on the couch, all the other babies wanted to join in! By the time I got the last one sitting on the couch, however, the first ones up were ready to take off!

Brief update on each of the babies: 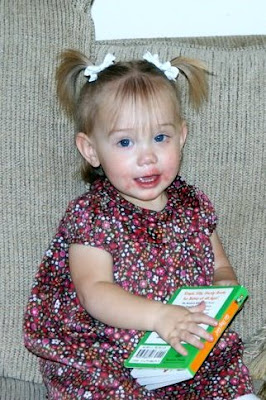 If I had to pick one who is the “leader of the pack”, Kassidy is it. She considers herself to be the “Queen Bee”, and she lets the others know it! She is very opinionated and determined to get her way. If I try to read her a story that she doesn’t want, or give her cereal she didn’t pick, she will throw a fit. She is quite smart and has figured out which things are “hers”—jammies, bed, bib, etc. Once I accidentally put her in Kaydence’s bed and she really let me know it! Some of the other babies, like Kyndall, are a little bit afraid of her because she can be vicious when she wants something. On the other hand, she can be very sweet and thoughtful. When Ryder starts crying, she looks for his binky and tries to put it in his mouth. At bedtime, she will bring me the jammies of whatever baby I am holding. If she finds something on the floor that she knows is not supposed to be there, she will bring it to me. 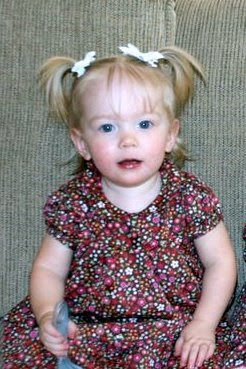 Kaydence is my “Little Miss Sunshine”. She is very sweet and is still my most cuddly baby. She is quick to laugh and can often get the other babies to laugh with her. She is also my best eater and is usually willing to try anything I give her. She has always liked having a “clean plate”, so whatever she doesn’t eat she tries to hand off to some other baby or throw overboard. 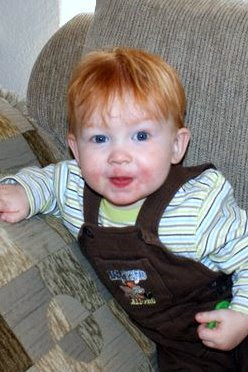 Rustin is also a pretty aggressive little guy—he is probably the “second in command” to Kassidy. His size makes it easier for him to get what he wants. He is my least cuddly baby, but when he does give a hug, it is a good one. As an infant, he always seemed so serious, but he has turned into quite a happy guy. He has some of the greatest facial expressions and he gets really excited about things. He is my best climber and doesn’t seem to be afraid of anything. 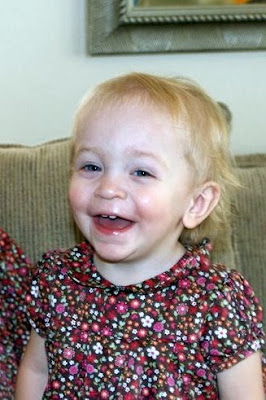 Kyndall is still my little peanut. She is sweet and easygoing, unless she feels like she has been wronged (and with four bigger siblings around, she gets picked on a lot). When she knows I am coming for her, she loves to run and hide in a small corner or space. She can be amazingly quiet and I once started to panic because I couldn’t find her—only to hear her laughing behind the rocking chair a few minutes later. As far as babies go—she is my easiest. She takes great naps and wakes up happy—she usually plays in her crib till I finally go check on her (unlike the other babies who let you know the minute they wake up!). She has the biggest vocabulary of all the babies so far. 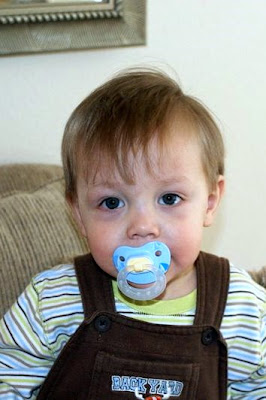 Ryder continues to be my high maintenance man! He is cute as can be, but he demands a lot of attention! He is also my worst sleeper and we usually have to isolate him from the rest at night so that he won’t wake them up in the middle of the night. Unfortunately he is still really attached to his pacifier, a habit I know I need to break him of, but sometimes it is the only way I can put him down and attend to the needs of the other four babies! He is a trouble magnet and is usually the first one on the scene when a door to a forbidden place (ie bathroom, pantry, my bedroom) is left open. He loves vacuums---hopefully that will last until he is actually old enough to use one!

Because they are now 18 months, they are allowed to go to the nursery at our church. Sunday was their first day. They loved it! I snuck inside during the middle to check on them (and snap a few pictures) and they were having so much fun that they didn’t even care that I was there. It helps that my friend, Virginia, is one of the nursery workers!

Everyone at our church has been incredibly supportive throughout this whole adventure. Several families in the ward have “adopted” a baby to help with during church. This week, when church was over, it was so sweet to see all these families lined up outside the nursery door to see how “their” baby did in nursery! Here are a few pictures from the big day! 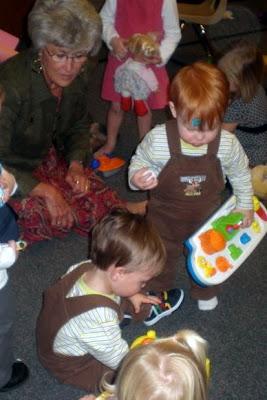 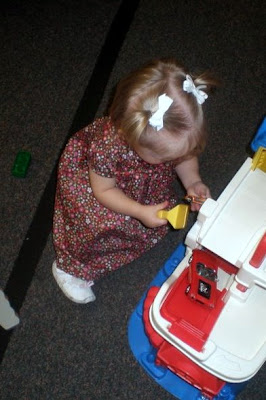 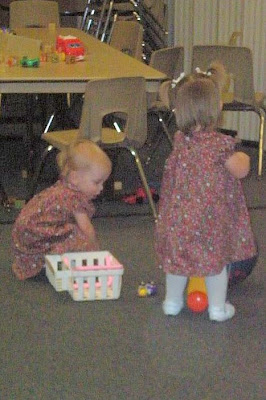 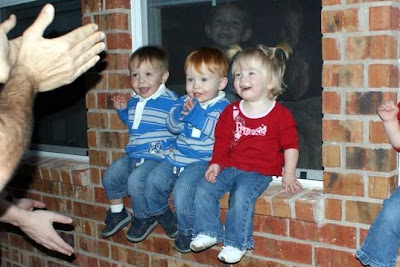 Ryder, Rustin and Kaydence on the window ledge in the backyard. If you look close, you can see Riley looking through the window on the other side. 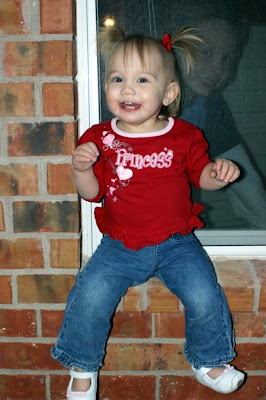 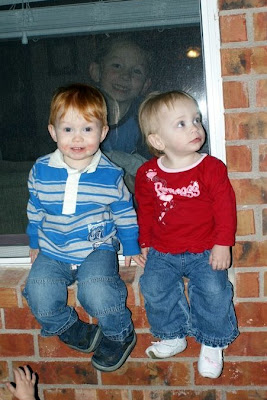 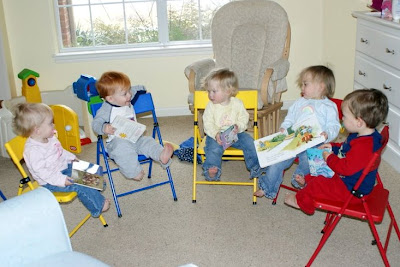 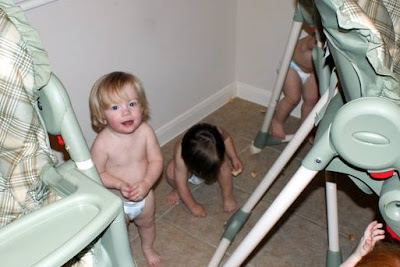 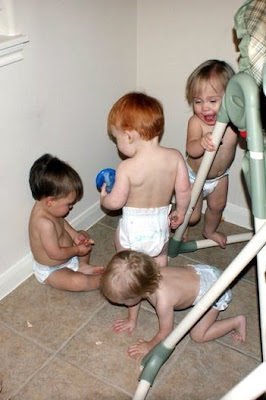 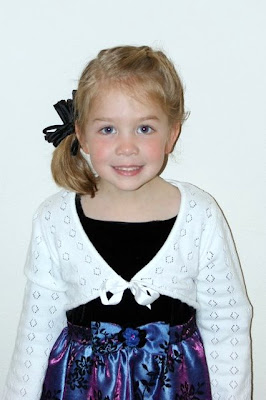 Kaiya before church on Sunday