This morning we were on the Fox & Friends morning show on the Fox News Channel. Live TV is always a little scary for me! We had to be at the studio, which was in downtown Austin at 6:45 this morning. We didn't actually go on air until 7:19 am, so the kids enjoyed exploring the set until it was our turn. Unfortunately, by that time, the babies were not quite as subdued as when we first got there, so they were all over the place during the interview. My sister, Tiare, who is here helping for a couple weeks was on the sidelines to wrangle all the run-a-ways. I think one of my favorite parts is when Kassidy hurls a little stuffed animal at us and Jayson masterfully catches it. I also had a talk with Kaiya beforehand about what kinds of things she should or should not be doing during the interview. She did great. As it turns out, it was Riley I should have had that conversation with!!

Here are some "behind the scenes" photos from this morning: 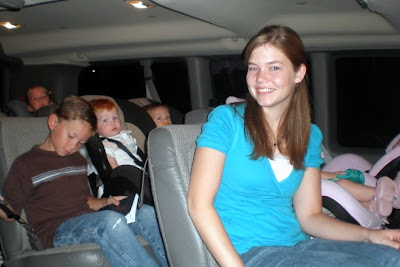 Bright and Early! Kaiya, Riley, Rustin, Ryder, Tiare, Kaydence and Kyndall. We were up ready and on the way to the studio at 6:15 this morning. 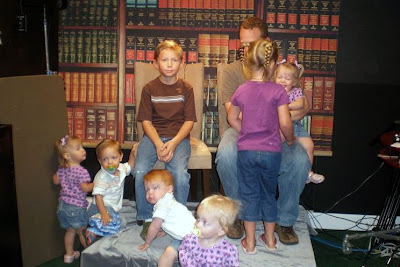 Setting up: Kassidy, Ryder, Riley, Rustin, Kyndall, Kaiya, Jayson and Kaydence. The guy at the studio said he had done thousands of interviews with everyone from governors to singers, but we were his first set of quintuplets. I have to say he was amazingly relaxed, considering the chaos we were creating. 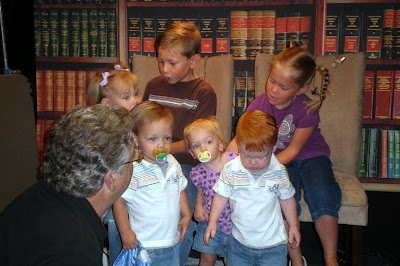 More setting up---TV Guy, Kassidy, Ryder, Riley, Kyndall, Rustin and Kaiya. The original idea was for Jayson and I to sit in the chairs, Riley and Kaiya to stand on the sides and all the babies to sit nicely in front of us. 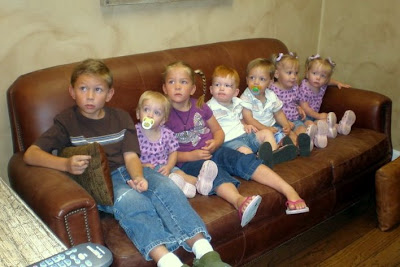 Riley, Kyndall, Kaiya, Rustin, Ryder, Kassidy and Kaydence. With several minutes left before our "hit time", we decided we better distract the kids with TV (they watched Animal Planet) so they wouldn't completely dismantle the TV studio.

I think it was great that the kids were running all around during the interview...it made it more real!

I agree - it was a great interview, even with real lively little folks. You both kept your cool so well with all that activity! Amazing. Those are some lucky kids.

I saw that this morning and had to come on to see if it was you! Been reading for a while! It was a great interview!

love those cute purple butterfly shirts...fun clip, and I liked jayson catching the toy, too.

I loved how you answered the "tough" questions and how Jayson caught that stuffed animal. You really are super multi-taskers now.

I love how active and wiggly everyone was. No one wanted to be held too long.

Very nice interview! I agree, I loved that the kids were being kids during the interview. Awesome job!

love it! by the end all the babies were off the set! ;)

That was a great interview!

I loved it. Kids crawling all over, Riley waving and you and Jayson calm and collected. I loved that you didn't criticize Jon and Kate. As always you were all terrific!

I think it's sad that they focused on Jon & Kate and their tragic marriage instead of asking how you keep it together and marvel at what a great job you are doing! They missed the point!

This is so funny because I don't know how you could concentrate on saying anything with the kids all over the place. I'd have been so distracted and wordless, so kudos to you both!

I think they did AWESOME!!! I was a little frustrated with their questions for you - they didn't seem fair or appropriate.