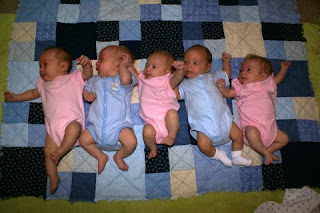 Last week was the babies’ two-month doctor visit. Normally doctor appointments are not something I look forward to, but this one was actually enjoyable! Things went very smoothly---due mostly to the army of help I took with me. Besides myself and my mom, three friends (Liz, Patti & Halli) joined in the adventure.

This was the babies’ first ride in then new van (affectionately nicknamed “The Beast”). Me, the babies and all of our helpers fit great, with room to spare. The doctor’s office was not very far---I think it took longer to load the babies into the car then it did to drive there. I have to admit that it was fun to be taller than everyone else on the road. Changing lanes and parking the Beast can be a little scary, but I am sure I will get used to it over time. We do plan on having a back-up camera installed soon, which I think will help a lot. It is awesome to have a vehicle that will hold everyone!!

The Babies First Ride in "The Beast" 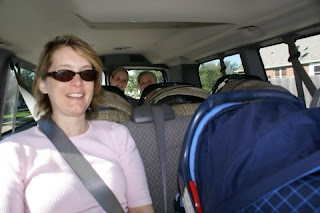 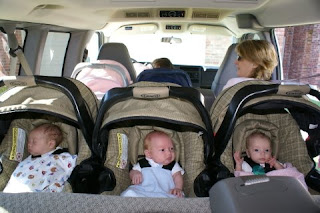 When we arrived at the doctor’s office, the nurses took us straight back to the exam rooms, so we didn’t have to wait in the lobby. As we walked past the other people in the lobby, someone said, “What happened? Did they have a sale at Babies R Us?”


The boys were taken to one exam room and the girls were taken to another. The nurses came in and did measurements on all the babies, then two doctors, one for each room, examined each of the babies. They were both impressed by how wonderful the babies are doing. There are no real concerns with any of them---the biggest problem any of them has is reflux. Rustin, Ryder and Kassidy even made it on the height and weight charts (around 5th percentile) for two-month olds.


Finally it was time for the immunizations. They each got four shots and one oral immunization. Of course, no one liked those, but by the time we got home most of the babies were sleeping, and all were peaceful. (An hour later it was a completely different story, however. Thank goodness for Tylenol!) The entire adventure took less than two hours, which is not much different than when I have taken just one baby to the doctor. I am very impressed with the pediatricians office for being so organized and ready for us and of course I am so grateful for all my helpers that came along!

This picture of Rustin pretty much sums up how the babies felt about getting their shots. 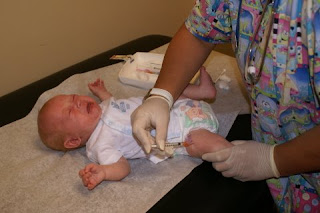 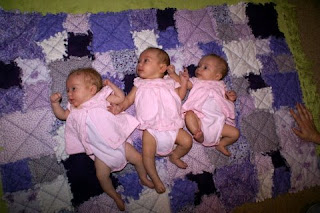 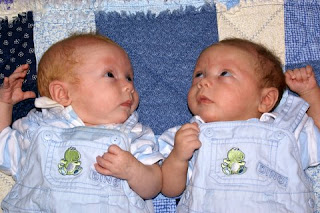 Riley and Kaiya pose with the quints for the Austin Family Magazine article. 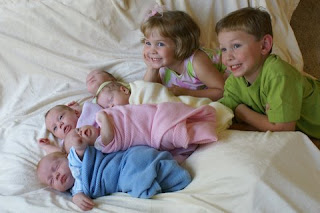 I just wanted to comment on your blog. I have truly been amazed by your story and I love reading the updates from both you and your husband. What a beautiful family you have. I am thrilled to read how well all your babies are doing. Your nursery you friends did for you was absolutely stunning, how fun!

Wow. Sounds like things are going really well. That is great. The babies look amazing and I LOVE all of the pictures. It is really wonderful that you take time to blog and share your story. Your family is extremely inspiring. :)

Sounds like quite a trip! It's so great that they are all doing well! They are so cute. I can't believe they are already 2 months old.

Some lucky grandma has the cutest grandkids in the whole world. Oh! I guess that would be me. Love Ya, Grandma W

What a beautiful family. I have twins and know what joy that brings...I can't even imagine what an amazing experience it must be to have quints and two other beautiful children! Your entire story is a wonderful one!

Glad to hear their checkup went well. I check your blog often for updates! Love seeing all the pics, all 7 of your children are beautiful.

What adorable kids! The babies are growing so fast! If it's any consolation I'm from a family of 11 and learned how to drive in a 15 passenger van. :)

I hate those vaccinations! I cry every single time Hannah gets one.

Thank you for posting new pictures of all your darling children. I can't believe how different the quints look from the last time I saw them.

I'm glad that you had a lot of help when you went to the doctor with the quints. What a fiasco that would be without help!

Rachelle,
your babies are adorable!!!
I'm so glad to know that everything is going well with all of you!!!
I loved the new pictures!!!! They are really cute!!!
Hope to see the little ones again!!!

I just L.O.V.E that last pic with the older siblings. They look soooo proud!!! How adorable!

I drove a 15 passenger "Beast" for a lot of years. If possible, park where you can pull through a parking place so you do not have to back it up, even if it means parking in the "south forty." at the supermarket. On the other hand, when you approach your own driveway, and you can see it is empty, back it into your own driveway or garage, so that the nose of your van faces out. You will always be able to see what is in front of you when you pull out, and the chances of backing over a bicycle, (or far worse, a child) are greatly reduced. It is great to see your babies so healthy and plump!

Just wanted to say I love your blog and I it's exciting to see the "babies" we've been praying for at school. Kaiya is a joy and your babies are beautiful! I am coveting your gorgeous nursery! WOW! Can't wait to see the babies grow this year..maybe even catch the "beast" when you have carpool.

I love that redheaded Rustin! (All are cute, but I have a certain soft spot for redheads!) It was so great to chat with you and then get on here and see pictures of all the little ones I heard "talking" in the background during our call. Keep it up! We love you all.

I'm so glad to hear that things are going so well. I love hearing about the babies, and want you to know that we're all still praying for your family.

It's a joy to read your blog and get a little glimpse into your life.

You will come to love your "Beast". The height factor is a very nice plus. (I feel like I am sitting on the ground in a regular car anymore.)

Congratulations on a beautiful family.

It is so wonderful to see the babies growing so big. They are all so beautiful. it was a pleasure to have taken care of you and all the kids.