The Twelve Days of Kindness

Several years ago my sister, Tiare, came home from her Sunday School class with a challenge—to perform at least one act of kindness for the 12 days before Christmas. She talked the rest of us into doing it with her and every night at dinner we had to report on the kind deed that we had done. Some deeds were bigger like helping with the children’s Christmas party at church. Others were simple like leaving an anonymous note on someone’s pillow or letting someone go ahead of me in line at the store. It was easy to get caught up in the hustle and bustle of Christmas and I really had to make a conscious effort to remember to do the kind deed. Overall it didn’t require a lot of time, but I loved how the challenge really changed my focus during the holiday season.

Since that first year, I have tried every year to do the “Twelve Days of Kindness”. Some years I have been better at it than others. One particularly memorable experience happened about six years ago. Kaiya was not quite one and Riley was three and a half. Jayson was out of the country on a business trip so I was doing the “single mom” thing. As luck would have it, I came down with bronchitis. I made an appointment at the doctor’s office, but when I showed up at the appointed time, the office was packed. The receptionist was VERY unfriendly, not just to me, but to everyone who came in. After waiting for over an hour, I knew I would not be able to see the doctor that day and still make it on time to teach my class that night. I felt miserable and frustrated and I started drafting a letter to the doctor in my mind, telling him how awful and rude his receptionist was. It was about that point when I remembered the “Twelve Days of Kindness”. My heart softened, and I knew that sending an angry letter would not make anything better. Instead, I remembered that in my car I had small wrapped ceramic snowman that I had planned to give to friend. I ran out to my car, grabbed the snowman and took it back inside. I explained to the receptionist that I would not be able to wait any longer and then I handed her the gift and said, “Merry Christmas!” The next day when I went in for my rescheduled appointment, the atmosphere at the doctor’s office had completely changed. The lobby was still full, but the receptionist was smiling and pleasant. I could see the snowman sitting in the corner of her desk. The small act of kindness had helped to change her attitude, but more importantly, it had changed MY attitude.

Today is December 13th and hence the first day of the “Twelve Days of Kindness”. I am going to take the challenge again this year, and I want to challenge each of you, my friends and blog readers, to do the same! Your mission, (cue “Mission Impossible” theme) should you choose to accept it, is to perform at least one act of kindness, big or small, everyday until Christmas. In the words of Yo Gabba Gabba, "Try it, You'll like it!!"

I have had several people ask me how the quints are doing with the Christmas tree this year. Last year I used a gate around the tree which worked pretty well for keeping the babies out and the presents and ornaments in. This year the quints are older and more clever and it only took seconds for them to breach the sccurity gate and begin dismantling the tree. Rustin attacks the tree every time I turn around. I've been putting them in time-out, but they are so fascinated by the tree, that I think they think it is worth it to go to time out if they can satisfy some of their curiosity. We only put ornaments on the tree that couldn't hurt them and that we didn't care about (I am tired of my snowman themed tree anyway, so secretly I am hoping they destroy everything and I *have* to get new stuff.....) so it really isn't that tragic when they do get to the tree. I actually think it is cute that they are so excited about Christmas and all that goes with it :-) 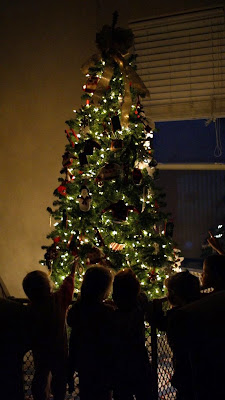 The quints checking out the tree for the first time. 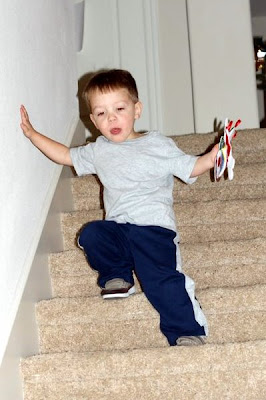 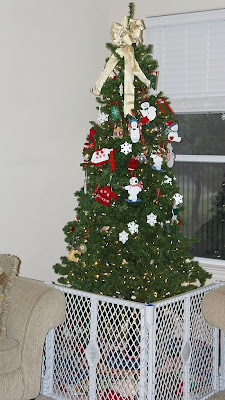 The tree---I finally gave up putting the ornaments back on the tree and just left them in a pile underneath! 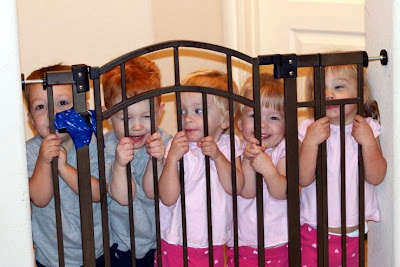 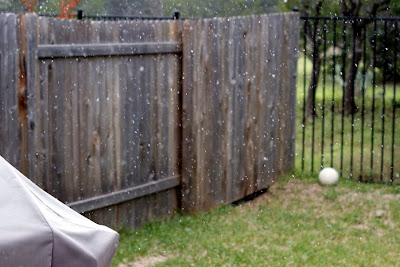 SNOW!! It rarely snows here in central Texas, so the kids were so excited when the forcast gave a 50% chance of snow. Riley and Kaiya prayed every day that we would actually get snow. I watched the forcast change from 50%, down to 10%, then down to 5% and I was so sad because I knew how badly the kids wanted it to snow. I was amazed when I looked out my window and saw that it WAS snowing!!! It was brief, and it didn't stick, but it was snow! Riley and Kaiya were at school, but fortunately their teachers let them out to see it. The quints were all taking a nap, so they missed it, but I did manage to get a few pictures to document the moment :-) 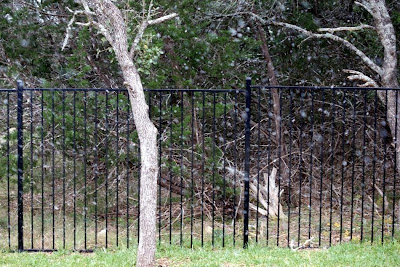 The Twelve Days of Kindness

I loved your post today! I was laughing out loud about the Christmas tree. So funny to see it bare from little hand height down. I really appreciated the 12 days of Kindness and your story at the doctor's office. I would never have given some mean old receptionist a present, so what an amazing lesson for me. Merry Christmas!

i love that idea, now to see if i can follow through with it?!

Oh those little mischief makers. I love them all.

We are doing an act of kindness each day too. We started it last week at FHE. Each of our 5 kids participates and mom and dad. We have a paper posted on the kitchen wall for each person and they are to write down what they did each day. Our one rule is that you have to do a kind thing for each member of our family each week. No fair just serving the baby.

I love that you still do it! I do too! Every year I have challenged my roommates to do it with me and this year I talked(and challenged) about it in visiting teaching! I shared the story of how you shut the gas tank thing that one time at a stop light! that was you right?

I like the 12 days of kindness/service. Love that you gave the gift to the lady, nice story.

What a great tradition! I also got a laugh about the Christmas tree. Our triplets are 18 months old now so we're dealing with that issue as well. We have the superyard around the tree and so far, so good!

Hi !.
might , probably very interested to know how one can make real money .
There is no need to invest much at first. You may commense to get income with as small sum of money as 20-100 dollars.

AimTrust is what you thought of all the time
The company incorporates an offshore structure with advanced asset management technologies in production and delivery of pipes for oil and gas.

It is based in Panama with affiliates around the world.
Do you want to become an affluent person?
That`s your choice That`s what you desire!

I feel good, I began to get income with the help of this company,
and I invite you to do the same. It`s all about how to choose a proper partner who uses your savings in a right way - that`s it!.
I take now up to 2G every day, and my first deposit was 1 grand only!
It`s easy to get involved , just click this link http://ajinilam.arcadepages.com/kivexa.html
and go! Let`s take this option together to become rich