Diary of a Wilkinson Kid

When we got to Denver, "Grandma Wilkinson" was ready with boxes of treasures for all the kids. Riley's box had a little notebook in it which he decided to use as a journal during the trip. He did a pretty good job describing our first few days there, so I thought I would let him tell the story for this blog entry :-) The following was copied word for word from his journal---I did change the spelling of a few words, but other than that, I left everything as he wrote it...

My Trip to Colorado, Chapter 1, Book 1

Hello, if you are reading this, I suggest you shut this book. Unless you want to hear about all the things I do. Let me fill you in. I am the brother of the quints and a sister named Kaiya. If you don’t know what quints are, they are when FIVE babies are all born at once. So video people come and video us. You might think “Wow, you’re famous” or you might think “Duh!”

This summer we went to Colorado. It took us 15 hours of crying, poopy diapers and Dora. So we set off. We were doing good until a thunder storm hit! Me and my sister got worried, so we took out our Book of Mormons and opened to a random page. Kaiya found a good verse. We both read it with a flashlight and said a prayer. Soon the rain stopped and there was less thunder. When we got there, we jumped into our pj’s and hopped into our beds. 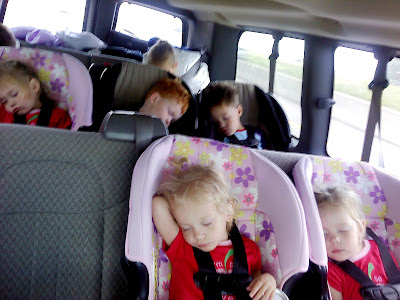 A rare moment in the car when all five of the quints were SLEEPING! Yay!

In the morning, our grandma gave us show boxes with stuff. We gobbled down our breakfast and threw on our Sunday clothes. Even though we were in a hurry, we still got there late. I had an awesome class. We talked about David and Saul. Then we hitched up and went home. When we arrived at our grandma’s house. We gulped down our lunch and I played with a helicopter. 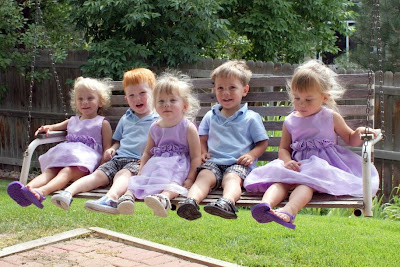 The Quints in their Sunday Clothes on the porch swing: Kyndall, Rustin, Kaydence, Ryder and Kassidy

After dinner, we hurried to bed. In the morning, I felt refreshed. I decided to play LEGOs so I did. A few minutes later, I had a serious thought. I decided that doing my math was a better idea than doing LEGOs, so I finished my math. It took a while, but it was worth it.

We swallowed our breakfast and I ran upstairs to read. I love reading. It’s just a thing you get addicted to for me. In fact, I read so much my mom takes away the privilege of reading. It is a spectacularly awesome thing to me, so I never let my book go to book jail. You are probably like me because you are reading the one and only copy of this book.

Today we get to go to the dinosaur tracks. Knowing that makes me feel great—a momentary feeling that you only feel at certain times. For me it’s when you have something special happen to you, like getting baptized. At the baptism, I couldn’t wipe the smile off my face. When we got there [to the dinosaur tracks], we had to park in the dirt because there was a gate that only authorized people could pass, so we had to walk the rest of the way. A few minutes later we exhaustedly arrived. The prints were big—well big compared to our feet.

Afterwards we had a picnic. In the place we found for our picnic, there were grapes growing. We had so much fun. 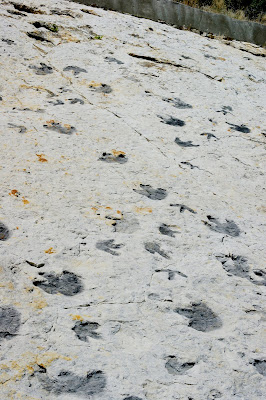 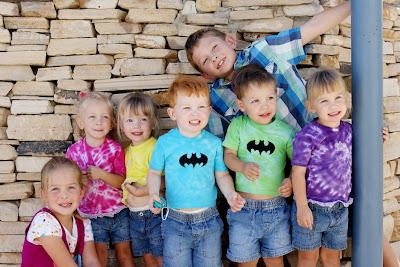 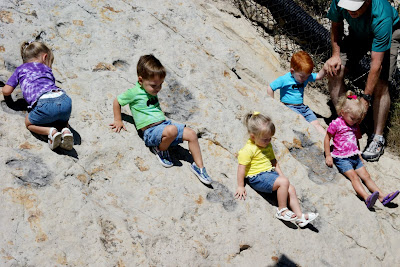 Climbing on the tracks: Kassidy, Ryder, Kaydence, Rustin and Kyndall 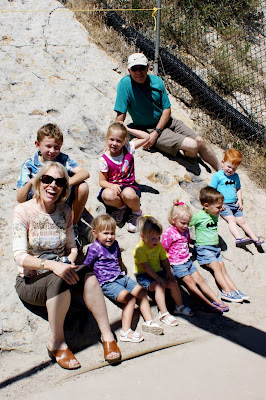 Grandma and Grandpa Wilkinson with all the kids 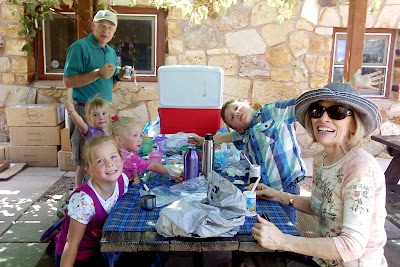 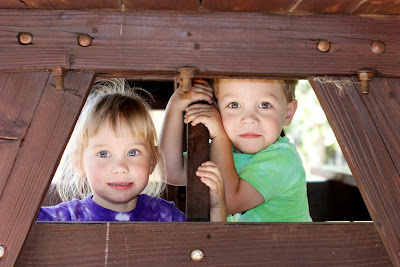 Kassidy and Ryder playing under the picnic table.

Afterwards we went to Red Rock. Red Rock is a place where there are really big rocks! We got to go 7000 feet high! We took loads of pictures. 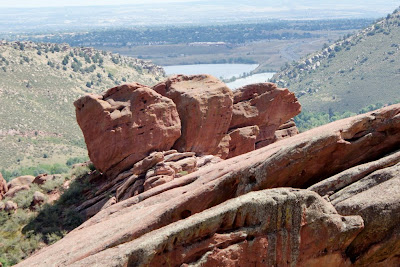 Red Rocks. Built into the red rocks is a huge arena where they often have concerts and other performances. 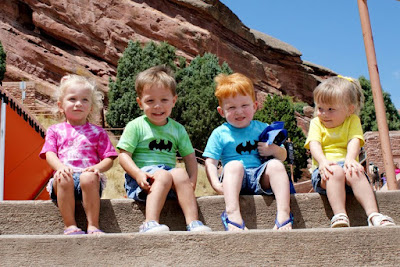 Kyndall, Ryder, Rustin and Kaydence (Kassidy went ahead with Grandma) 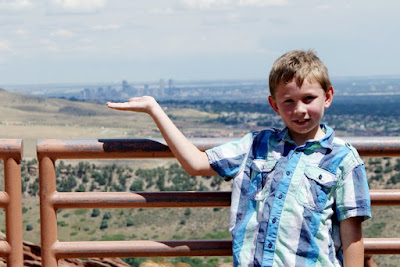 Riley "holding up" the city of Denver 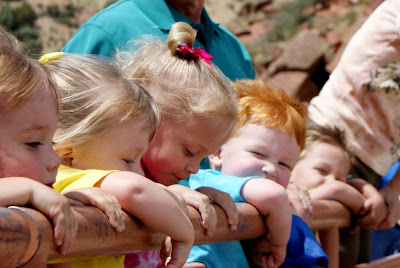 Looking over the railing: Kassidy, Kaydence, Kyndall, Rustin and Ryder 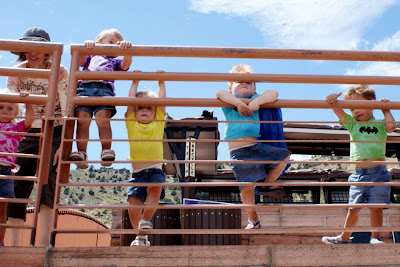 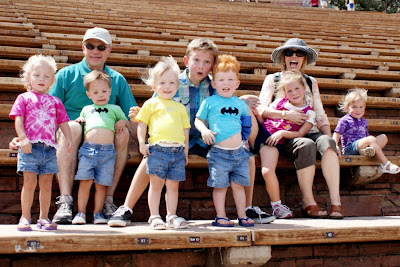 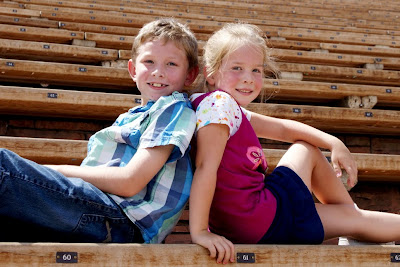 When we finally, exhaustedly, thirstily, but definitely made it home, we had dinner. After dinner an amazing surprise came over our house. We discovered there was a rainbow. I immediately took out my handy video camera and videoed it lots. You might think “Oh, a rainbow.” Or you might think “WOW!” It wasn’t a normal rainbow--it was a full one! 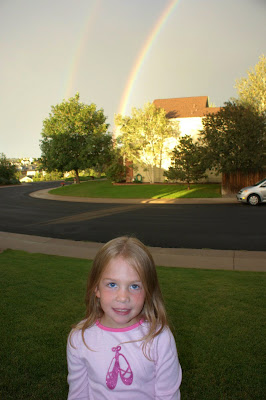 Kaiya with the double full rainbow---I couldn't fit the whole thing in the picture, but it was a great rainbow!

Me and Kaiya jumped in our beds and slept in. In the morning my mind was not processed. I knew that because I tried to do my math, but failed. My brain was still tired, so I did LEGOs. LEGOs are a thing that many people like, but if you don’t like LEGOs than you won’t understand until you play with them. It would be quite understandable because most people who would actually bother to read this would probably be girls, but I’m not sure. I’ll actually probably be reading this to my children in the future. Speaking of the future, in the future you might do anything…all you can do is guess. I want to be an author. Did you notice that word “want”? I want to be an author, but that doesn’t mean that I will. So after I played LEGOs, I had a waffley breakfast. After breakfast, we went to the Horton’s. 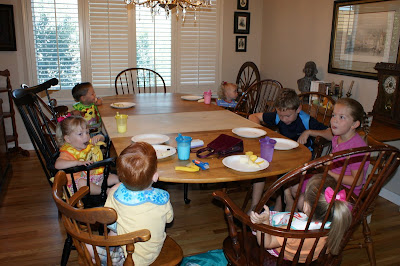 Now, you are probably expecting something different, but I haven’t written in a long time---well let’s say two days---so I’m still at Colorado. You might be thinking, “What about the Hortons?” or you might be thinking, “This is just a dumb thing to get the reader’s attention.” WHAT? See--you might have seen that and thought, “I have to read more to see what that was all about.” So you read on. Or you might have just read on thinking what a great book this is. I think you should just forget about the Hortons because I forgot to write about them. I mean I have been very busy with math and other stuff like going to the zoo today. 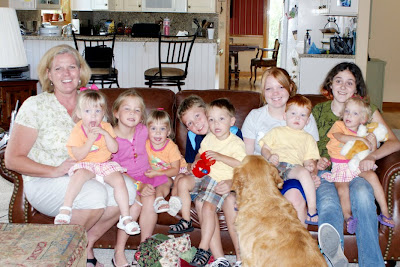 Visit with the Hortons! Liz, Kaydence, Kaiya, Kassidy, Riley, Ryder, Megan, Rustin, Megan's friend Sedona, and Kyndall. Liz was one of my dearest friends who helped me out a ton when the quints were born. On the quint's first birthday, she moved to Colorado Springs :-( We have really missed her! 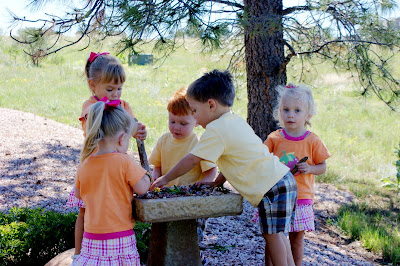 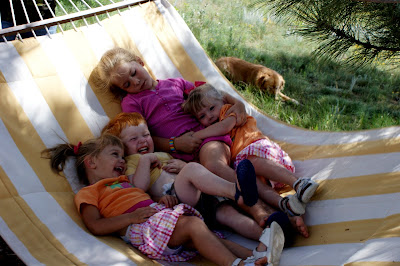 Everyone also loved the big hammock! I am only sad I didn't get a chance to try it out. 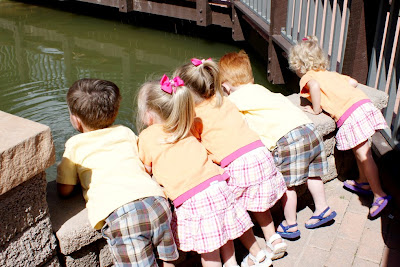 Ryder, Kaydence, Kassidy, Rustin and Kyndall---We went to a nearby park to feed the fish. 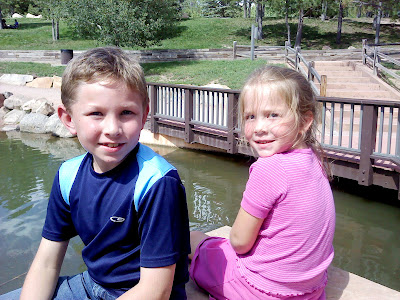 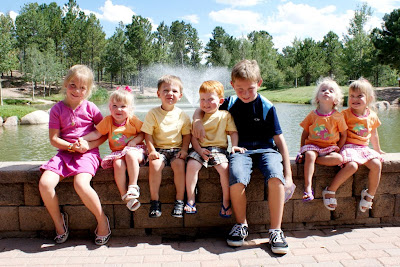 All the kids! Colorado was SO beautiful! By the end of our trip, I was ready to trade in the hot, humid Texas weather and move there :-) I just had to keep reminding myself that it snows in Colorad during the winter, and winter in Texas is awesome!

Stay tuned for pictures of the zoo, and everything else that Riley didn't write about :-)

Diary of a Wilkinson Kid

What a fantastic diary. Riley you are my hero.

Riley you are a fantastic writer! I love this post!

He is quite the author!!! Loved his outlook on the trip - and the waffley breakfast! :)

What a great journal by Riley!!!! More kids need to write books! So fun to see things through childrens eyes!

I love it! This is much more interesting than my diary. Keep doing math Riley. Also, I think you should make a blog.

Great Job Riley, you are quite the writer. Keep up the good work. I love to read too, in fact my mom used to catch me reading under the covers with a flashlight when I was a kid. You will do real well in school if you keep up the writing, math and reading.

Was that Dinosaur, Colorado? I went there about 12 years ago?

Riley you are a phenomenal writer. I think you would be a great author! Thanks for posting this. This was a great reminder that kids really are thinking all the time, even if they don't say much, or pretend they're not listening. My perspective is much clearer, thanks!

I came across this blog looking for stories on multiple kids (no, I'm not having any, I was just curious for another reason), and suddenly I see this.

I was a writer as a kid - I kept a diary, wrote poems, and even a little newspaper - and I just LOVED Riley's diary, I'm sure that, if he really wants, he can be a great author.

BTW, all your kids are lovely!

Hey! Girls can like Legos too. I can not wait until my son gets older and I can bring down the Rubbermaid box + of Legos from growing up that I've saved for him!

You have a talented writer there, and no mistake!

Riley, I love your writing style! You're very original and creative with words. It's a pleasure to read! And, it sounds like you had a wonderful vacation, too. :)

And it's surely a good thing you are there to hold up Denver.

Riley rulez! u should open a blog for this awesome kid!
No, seriously, i can't believe a kid wrote this post!
Congratulations!
And Riley, you can become an author of great books when u grow up, really!

by the way: im not native english speaker, so yeah, i make a lot of mistakes when i write :S sorry for that!

I think you could be a writer, for sure!

Looks like you guys had a great time. Adorable photos as always.

Riley you are a fabulous author and I loved reading about your trip to Denver! Keep reading and writing (and doing your math) and some day you may have a best seller!

Okay, I am in love with Riley! What a fun journal entry from a very awesome kid! I agree that he should have his own blog!

Keep up the writing, Riley! I am sure you will be an author one day if you want to be!

Riley I think you will be a great writer, I'm saving my money to buy your first published book, in the mean time I will just read your journal again.

He's a great writter for his age and I really enjoyed reading about the trip from his point of view.
You have a great collection of pictures of all the kids from the trip.

Loved it, He is going to be a great author some day! Or an Accountant with all that math he was doing on Vacation!

Hi there. I just found your movies on Youtube, and I got so amazed that I just had to look at you blog. What a beautyfull family you all are! Im sitting in Norway, watching, and I just have to smile <3 Wish you all the best of luck!
Hugs from Stine

What a great diary! You ought to have it printed up for him with pictures so he really can read it to his children in the future! It wouldn't be very expensive to do.