Report from the Trenches...Day 1 of PTBC 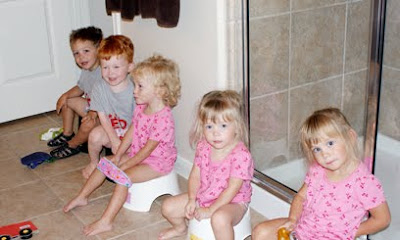 Ryder, Rustin, Kykndall, Kaydence and Kassidy
There's no turning back now...Potty training has begun. Day one of "Potty Training Boot Camp" is over and I still haven't decided whether or not it was successful. The kids were super excited to pick out a pair of underwear to put on this morning. I set the timer and every 30 minutes, we all marched into the bathroom for a potty break. Potty Elmo showed them how it was done (which they all thought was completely hilarious). They all seem excited about the concept of being potty trained, but they haven't quite figured out how to put it into practice.

Of course, being a statistician, I am all about the numbers, so I tried to keep track of all the happenings at the house today. The good news is that Rustin knows how to make things happen on the potty. In fact, he managed to get something out every single time he sat down. He was quite proud of himself and we all clapped and cheered every time he did something. He also enjoyed picking out his two M&M's every time. The bad news is that there were 15 "she she" accidents and 1 poop accident, and none of the other kids ever got anything to work on the potty. But, on a positive note, they all enjoyed putting on nearly every pair of underwear that they owned throughout the course of the day!

Things were a bit chaotic at times. Some kids wanted to stay on the potty and try for a while. Others wanted to be done two seconds after they started. Some loved to wash their hands and others didn't. At one point, I was in the bathroom with Ryder and Kassidy, trying to get their hands clean an underwear back on. By the time I finished with them and returned to the kitchen, Rustin and Kyndall had dumped the contents of a juice box on the floor and were having a grand old time skating in it. While I was cleaning up that mess, Kassidy had an accident, so it was back to the bathroom to clean her up. At least there is never a dull moment around here! (I only wish now that I had taken more pictures!)

Report from the Trenches...Day 1 of PTBC

You need one of those lifestream cameras that you wear around your neck and takes a picture automatically on timed intervals. :)

I'm sorry to say that I laughed out loud when I read your blog. It might have been hysterical type laughter wondering if this time they will break you. I hope not.
Just remember that Kevin and I said we would come and baby sit the kids when they are potty trained.

between the diapers toand underwear, you have training pants for potty
it's like underwear but much absorbent for accidents
http://www.thanksmama.com/Training_Pants_s/3.htm

maybe it would have been easier to train the girls, then the boys- vice versa...just a thought :)

Keep it up, though! I just potty trained my little guy, and the first day was the worst. He never did a thing in the potty. I broke down sobbing and was going to quit. Day 2, he picked it up and has done amazing since! (except poop, yuck. but oh well)

Good for Rustin! Hopefully the rest of his siblings will follow his good example.

Good luck. We are all rooting for you and the kiddos.

I hope that day 3 today goes better than day 2 and 1. Rustin leads the way, why am I not surprised? You will get through this and hopefully with you amazing sense of humor still functioning.

The Zoo pictures were so fun....thanks for sharing.

I needed to read this post today since I am in the middle of potty training frustration. I have been potty training my one 3 1/2 year old boy for five months (with a month break in the summer before and during vacation) and we are still in accident central. (I use lots of spot shot). He's only pooped in the potty three times in 5 months although he mostly pees in the potty. It makes me feel better that I don't have 5 to train it once. I'm glad you were able to get a good blog post out of the mayhem of the first day. It sounds like you are having some success if you have one already doing well, that is great! Good luck with the rest of the boot camp.

I'm sure you have gotten a million advice emails, but my aunt is in the process of potty-training her 3rd, and has excellent advice: Underwear feels too much like a diaper. Going naked for 2-3 days (at least on the bottom) works like a CHARM. This is why she has potty trained all her kids in the summer. My cousin just walked around naked for a couple of days and got it. When she wore underwear she was guaranteed to have accidents. Good luck1!!